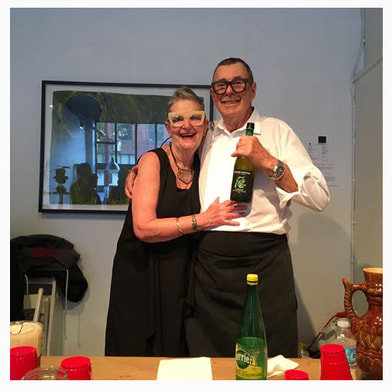 ​Wayne passed away before learning that he and Colleen had won the 2017 award.

Wayne and Colleen met in Colleen’s hometown of Christchurch New Zealand in 1960 while Wayne was attending a Rover Scout Jamboree.  They were married in 1963 and moved to BC shortly thereafter.  They started visiting Mayne Island in the 70’s and build their home here in 1994.

Volunteerism was in Wayne’s blood and he has instilled that spirit into his family as was evident when grandchildren showed up at Lions events to help set up tents.  Wayne was the Lions “go to” guy and was involved in many projects during his time as a Lion.  He was integral during the design and building of the Adachi pavilion in Dinner Bay Park, and for over 15 years he could be relied upon to offer support as and when needed.  Wayne clearly embraced the Lion Motto “We Serve” with vigor and good humour.

His volunteer work did not end with the Lions.  He was instrumental in the starting of Mayne Island Assisted Living (MIALS) and was a volunteer driver for them.  He was on the Bennett Bay water board and was a driving force behind the M.I. Community Bus program.

The Island has benefited from Colleen’s drive and community spirit as well.  As Co- Chair of MIALS, she has worked tirelessly on programs and funding.  For many years, she volunteered her time with the M.I. Rate Payers Association and is currently on the Board of the M.I. Community bus program and has recently taken the position of Treasurer of the Water Board.

Sadly, Wayne died suddenly in September, a great loss to us all.  On December 9th, Wayne and Colleen’s names were added to the “Islander of the Year” plaque in the Adachi Pavilion at Dinner Bay Park where family from New Zealand and from across Canada mingled with Island friends to remember Wayne and celebrate his life.  A commemorative plaque will also be mounted on the Lions Flagpoles in Miners Bay Park as a constant reminder of this wonderful Mayne Island family.

Wayne and Colleen epitomize the spirit of Mayne Island and Wayne will be remembered as someone who was always there for his community, just as Colleen continues to be.