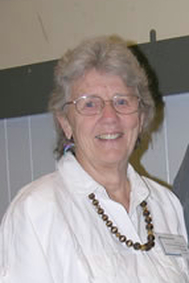 Interview with Mary Cooper, Mayne Islander of the Year 2015

Those Mayne Islanders who filled the Mayne Island School Gymnasium for Lions Charter Night on November 7th, will recall not merely the unforgettable roast beef, done to perfection on a Traeger Grill, which was later auctioned off, and the welcome by Zone Chair Alan Guy, but also the moment when Neil Howard took the microphone and introduced the Mayne Islander of the Year: Mary Cooper. I have the script for Neil Howard’s citation before me as I write. Mary (I quote Neil) has been “an ardent advocate” of water conservation. “Our winner’s contribution”, Neil went on to say, “has been the creation and development of an integrated water system” on Mayne Island. She was also present at the birth of the Mayne Island Boaters’ Association, and was its founding chair. For relaxation – for of late her health has forced her to relax -- she paints and plays bridge. She is, Neil reported, a “ruthless” bridge player, though I think that the adjective “ruthless” was a rueful last-minute interpolation by a bridge aficionado who is no mean player himself. The adjective is not to be found in the script which Neil gave me.

I went to interview Mary at her home on Club Crescent Drive, and she met me at the door, supporting herself with a walker. She had returned to Mayne Island only a few days before from Victoria General Hospital, where she saw at first hand, the B.C. Health System under pressure, and failing to handle it as well as it might. We sat down at her kitchen table and Mary told me about herself. She began her life and career in Chatham in southern Ontario, which is about as far south as Canada extends, and there she met her husband Jim, a stationary engineer who died only about a month and a half before we had our conversation. His obituary has appeared in the December, 2015, Mayneliner. Jim and Mary moved from place to place, to wherever Jim’s career called him, though they found time and energy to build a cabin retreat in northern Ontario, not far from North Bay, where the black flies swarm in the spring and the snow lies deep in the winter. Finally they made Georgetown north-west of Toronto in Halton Hills their home for eleven years and spent summer vacations in their cottage. But Jim and Mary needed more sun, and so they purchased a twenty-six foot boat and sailed for a year in the Bahamas. Then the twenty-six foot boat gave way to a thirty-one footer and finally a forty-footer, but all of them were called “Nanda”, meaning “graceful young white swan” in a First Nations dialect. Winters they spent on their succession of boats, and summers in their northland cottage. Their wanderings ended twenty-three year ago with their arrival in Mayne Island. Mary and Jim’s life story since then is nothing less than the history of the Mayne Island Integrated Water System Society. Try searching for Mayne Island Integrated Water System on Google and Mary’s name will come up.

I suspect that many city dwellers can go through life without ever hearing of an aquifer. It is an underground layer of permeable rock, sand, gravel or silt that stores water which can be tapped by a well. Tree roots reach down to it, and if more water is pumped out of it than rainfall can replenish, the aquifer level can fall so low that tree roots cannot reach it and the trees die. Dead trees are a serious fire hazard, Mary reminded me. I told her that we have four tanks on our property, and by the end of every November, they are full, and any overflow which the earth cannot absorb, trickles down to Campbell Bay. Could we not direct the overflow downwards into the aquifer? We could try. Ponds and swales help; they store rainwater until the earth can absorb it. So would sumps, which act like wells in reverse. Water overflow could even be pumped down into the aquifer.  Depleted aquifers cannot be reconstituted. Mary told me the story of some property owners on the San Juan Islands south of the border, who bought lots for building cottages, only to find that there was no water system with which they could connect. So they thought they would collect rainwater, but they found that rainwater belongs to the state of Washington. So what to do? Import water? Or desalinate? It is no easy choice.

Mary told me that she was not exactly in at the creation of the Mayne Island Integrated Water System, for what she found here was an organization of folks who thought that one big system could serve all Mayne Island, and it was being gobsmacked by reality. Mary arrived in time to help guide the system through its mid-life crisis, and make it work. She has been a tireless missionary for water conservation, and it has not been an easy job. Summer visitors do not understand. They argue that since they pay for water that they do not use during the winter months, they have the right to use as much as they want during the summer. The rules of hydrology should be changed to meet their concept of fair play. But aquifers and hydrology have their own rules, and those who violate them should remember the fate of the unfortunate San Juan cottagers who cannot connect to any water system.

Mary was also a founder and guiding spirit of the Association of Mayne Island Boaters, though she was careful to give credit to the many boaters of Mayne island who cooperated with her.. The Association started about 2002 when it looked as if the boat ramp at Village Bay was going to be closed down. The Boaters are now a fast-growing group, deeply involved in the building of new harbor facility in Horton Bay. And Mary paints. She started painting in 1963, while she was still living in Georgetown, and she is now a member of the Mayne Island Monday Painters Group, all of them watercolorists like Prince Charles, though Mary also uses oils.  And let us not forget bridge. Jim and Mary were formidable players – three-time trophy winners. She has also been our chief electoral officer for fourteen years and has organized three referenda for the new fire hall. One of the referenda was canceled, but only after all the organization was done, and so we can count it among the three. The last carried the day, and it was with some satisfaction, I think, that Mary attended the opening of the new fire hall on November 28th. Physical frailty is not holding Mary back. At the moment, a hip needs repair, but once it is sound again, Mary will return to Mayne Island life, as vigorous as ever. The robust defender of the Mayne Island aquifer will don her armor again.