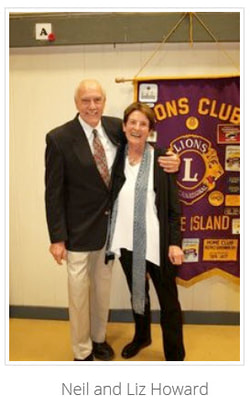 ​Liz and Neil Howard were the recipients of this year's “Mayne Islanders of the Year” award.

Occasionally when names are submitted to the selection committee for the “Islander of the Year” award, individuals who are nominated are part of a couple.  In this year’s selection, Liz and Neil Howard were both strongly nominated, and considering all of the time they have spent enhancing the community of Mayne Island through their many capacities as group members and volunteers, they were the obvious choice for this year.

​Both Liz and Neil were long time residents on Mayne Island where they were heavily involved in community affairs. Although they have moved on to their new home in Sidney, they were able to attend the November Lions Charter night to receive their award.

The list of their contributions to Mayne Island life could go on for some length.

Neil served in several executive positions of the library, the Silver Maynes, and as a member of the scholarship selection committee. Neil was a prominent member of the Mayne Island Lions Club and held many positions on the Executive including President.

​Liz was instrumental in the Garden Club, the Terry Fox Run, and in the development of the Japanese Garden. Liz was well known for her work in the Japanese Garden which included orchestrating the annual Christmas light display in the garden each year along with a team of volunteers.

Both of them helped in the single seniors’ events, the annual salmon barbeque and were avid bridge members.
​
As they become more involved in their new community of Sidney, we thank them both for their countless hours of service in many capacities during their time here!  We are grateful for their services on Mayne Island and wish then well in their new community, where we are assured they will also be active volunteers!  Neil has already become involved in the Sidney Lions Club and spends time assisting at the Lions Food Bank.