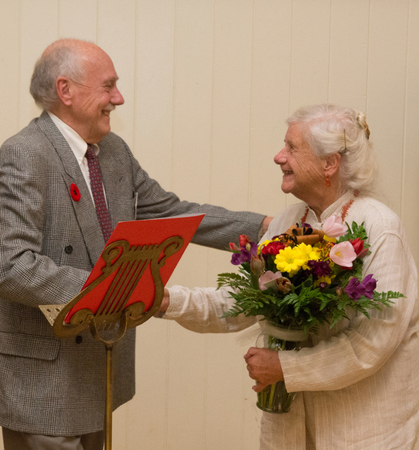 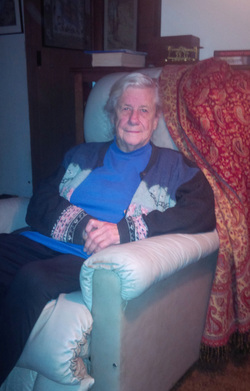 Ann Johnston. Photo by Allan Evans
Ann Johnston was born and raised in Montreal and she came to Victoria with her husband where their two children were born. She taught briefly at St. Margaret’s School Girls School in Victoria until she was fired for becoming pregnant. I reflected, as Ann told me about her dismissal for pregnancy, that the past really is an alien culture, where St. Margaret’s could share the mindset of the Victorian mother who told her daughter, who asked what to expect on her wedding night, that she should “close her eyes and think of England.” Ann returned to Montreal, where she taught elementary school, then went on to teach in to the U.K. before coming back to Montreal to teach high school, and while there, organized the Montreal Teachers Association. Then she spent four interesting years as principal of a school north of Montreal that  took a special interest in children with learning disabilities which educators were just beginning to recognize. Her school worked closely with researchers from McGill University  and the Montreal Children’s Hospital.  In the mid-sixties she completed a master’s degree at Harvard and in 1971 she began a doctorate at OISE (Ontario Institute for Studies in Education) in Toronto. Then she returned to the west coast at a time when British Columbia had its first NDP government under Dave Barrett.

It was a stimulating time for an educator. There were a number of government-funded programmes in place to help young people, often boys,  who had “fallen through the cracks”, dropping out of school after Grade 7, and disappearing into the masses.. The new NDP government decreed that these programmes must work together within the school system if they were to receive public funding. For a teacher with Ann’s background, the situation had “challenge’ written all over it. She pioneered two alternative programmes in the school system. She is clearly still proud of one of them, called “Sunrise East” which she began in Vancouver Technical School. ‘It is still going”, she told me.

Here on Mayne Island, she was one of a trio of women and the only one still with us, who chose the December day in 1985 when the Lions Santa Ship visited Mayne Island to set up the first recycling depot. It was outside the Agricultural Hall while Santa was inside. The recycling depot would move to the shed behind the Ag Hall, and then to the lumber yard where the Home Hardware is now, and finally, five years after its beginning in 1985, recycling would get its present location. Ann is still involved.  She took the lead setting up programmes in ‘Neighbourhood House” next to the Mayne Island School,, in a building rented from the school board for $1.00 a year. There were three programmes, one for pre-schoolers, one for after school and a third  for teenagers. They ended when “Neighbourhood House” burned down, leaving only a dilapidated gateway as evidence of its one-time presence. Ann was very interested to learn that a programme for teenagers has been revived in the Old School house, which the Mayne Island Firefighters, spearheaded by Bill Jamieson, Kyle Stobart and Eric Rice, plan to renovate and recycle as a community resource. If the plan succeeds, it will save a fragment from Mayne Island’s history and continue a programme that Ann began. The old schoolhouse is the oldest building on Mayne Island, predating St. Mary Magdalene Church by four years.

Her energies lately have been invested in the Mayne Island  Conservancy which is working to maintain trails on Henderson Hill and replant Bennett Bay Park with trees. “We have just received funding for sheathing the pilings at Bennett Bay dock with netting to encourage herring to spawn”, she reported. (Unknown to either of us, the day before we spoke, the nets were placed around the pilings to prevent the spawn from making lethal contact with the creosote on the pilings.)  She is also proud of the Conservancy’s effort to protect and preserve native plants in the Conservancy’s nursery on Gallagher Bay Road. The nursery now has taken more than one hundred native species under its wing.

Was she surprised to be chosen Mayne Islander of the Year? “I was very surprised,” she replied. It is hard to think of anyone more deserving.